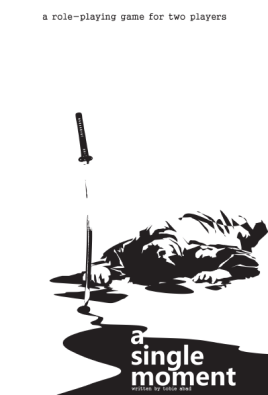 A Single Moment has to be one of the most unique RPG’s I’ve had a chance to review on my blog so far. Written by fellow Philippine Game Designer Tobie Abad, A Single Moment is a Roleplaying game for two players that tells the story of how two Samurai have come to odds and what bitter end awaits them.

Weighing in at a slim 43 pages, and with layout by Eloy Lasanta of Third Eye Games fame, A Single Moment would be best described in one word as “Focused.” While there is a greater narrative that unfolds, the assumption of the game is that it begins with the two principal characters already about to face off in a duel, and that the rest of the story is told in flashback.

Tobie shows a strong preference for the cinematic in this game, and the entire “experience” of the game must be envisioned through the context of a movie.

Rather than go over the full details of the game’s structure, I’ll go over it in broad strokes.

The game breaks down into several phases: The Opening Scene, which establishes who the two principal characters are, when and where the fight is taking place, how long this grudge has been left to fester, and what the tale is about. Each of these details are established in an alternating fashion by both players.

At this point, the players then go through the chapters, which detail the events that lead to the final single moment. Players use the chapters to build the tale. In playing through the tale the players attempt to resolve each scene and gain Choice Tokens.

At the end of the chapter, these tokens are converted to dice that are then rolled. Depending on how favorable the outcome, the players can either gain Edges, Hatred and Scars.

Hatred opens up a secondary scene wherein the Samurai in question has to deal with it by either Channeling their Anger or Letting Go of it. These can channel the story towards the final confrontation.

When all chapters are done, the finale is resolved, using the Edges and Hatred gained in the previous chapters. These form the dice pools used in battle, and the fight ends once a player runs out of Edges. Once the fight is over, the triumphant and defeated players get a chance to narrate the immediate and long term outcome of the confrontation.

Given the nature of the game, it becomes nearly trivial to strip out the base “setting” and replace it with anything from cowboys to space opera. As long as two things want each other dead, you’ve got a game of A Single Moment. Tobie acknowledges this by adding other genres to use from space opera to pulp and even romcom.

His additional notes also include a means to extend the game beyond a single confrontation to a longer format.

A Single Moment knows exactly what kind of game it wants to be. A two-player story game where the mechanics exist only to lend just that extra touch of uncertainty to leave both players guessing which samurai will walk out of the duel alive.

It’s emotional, gripping, and single-minded  in what it wants to do and in that sense the game is as damn near perfect as I can think of. However, this same laser-focus makes it a game that I can’t imagine playing more than once. I’m the kind of guy who quit A Song of Ice and Fire once they threw a kid out of a window for seeing something he shouldn’t have, and so this sort of setup is not particularly appealing to me from personal preference due to my aversion for Tragedy.

But that aside, can I recommend this game? Absolutely for as long as you find this sort of thing fun.

A Single Moment is available in PDF from DriveThruRPG for $8.00 or roughly Php 373.00

For more of Tobie Abad’s thoughts and musings, you can check him out over at TAGsessions

This site uses Akismet to reduce spam. Learn how your comment data is processed.